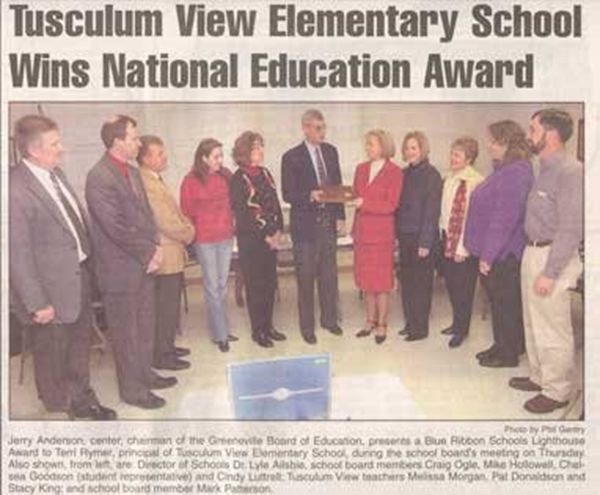 Thirty schools from across the nation were named "Lighthouse Schools," including three from Tennessee. These schools were selected based on nominations to identify and recognize successful schools exhibiting a strong commitment to educational excellence for all students, according to a press release from the school system.

Attending the conference from Tusculum View School were its principal, Terri Rymer, and, three teachers: Stacy King, Pat Donaldson and Melissa Morgan. Ailshie and Jerry Anderson, chairman of the Greeneville Board of Education, also attended the ceremony. Also, Dr. Linda Stroud, principal of Greeneville Middle School, and GMS teachers Debbie Hendrix, Jana Wills and Jamie House were in attendance and were presenters during the associated conference activities. In 2004, GMS received a national 21st Century Schools of Distinction award for technology excellence.

The Greeneville Board of Education recognized Tusculum View and its accomplishments during its regular monthly meeting Thursday at the school system's central office. Attending the school board meeting were Rymer, King, Donaldson and Morgan, who received the award plaque from Anderson and Ailshie.

A school celebration is being planned, and more information about this event will be announced later.

Ailshie said, "I am thrilled for Tusculum View Elementary School, Mrs. Rymer, and the entire faculty and staff. Locally, we have known for many years of the many wonderful things happening at the school, arid now these practices have been recognized and validated by an organization that spends its time researching best practices. I commend Mrs. Rymer and her staff for demonstrating initiative in applying for this award and being evaluated against the very best schools in our great nation. I know that the Town of Greeneville and its citizens celebrate with us."

"We now have three schools that have been recognized at the national level along with the system's prior recognition of its technology infrastructure and program." (EastView Elementary School was named a national Blue Ribbon School of Excellence in 2004.)

Ailshie continued, "There: will always be challenges to overcome, but another significant step has been taken: toward achieving the vision of being a 'world-class' school system. We have the most qualified and dedicated teachers and I staff to be found and wonderful support from our parents and the community, therefore our success is assured. "Again, I congratulate Tusculum View for its award and I can't wait for the school's celebration."

Anderson added, "We are indeed proud of the accomplishments of Tusculum View. The staff has worked hard to improve teaching and learning at many levels. Being one of 30 schools recognized across the nation has brought attention not only to Tusculum View, but to our entire system."

Blue Ribbon Lighthouse Schools "serve as beacons of exemplary achievements and contributions to ensure successful educational experiences for all children by shining a positive light on the nation's best schools and programs that work," a press release said.

It continued, "The program focuses on locating successful best practices and programs that work in education to serve as a marker for schools that desire to be high-performing beacons for today's educational culture."

"It is our honor to recognize these schools that are 'going above and beyond' to meet the diverse needs of their students. It is this exemplary attitude that brings schools above the status quo by incorporating innovative techniques to overcome obstacles in educating all children," explained Bart Teal, executive director of Blue Ribbon Schools of Excellence, Inc.

Celebrating the third year of recognizing exemplary schools, the Blue Ribbon Lighthouse Schools Award Program is administered by Blue Ribbon Schools of Excellence, Inc. All K-12 schools - whether public, private, charter, parochial, Department of Defense or Bureau of Indian Affairs schools - are eligible to participate. The national recognition program is designed to find "what's right" about education and celebrate the successes of these schools, the press release said.

The Blue Ribbon Schools Blueprint for Excellence Conference highlights nationally- recognized schools and programs from across the country.

Blue Ribbon Schools of Excellence, Inc., is a not-for-profit organization that administers this awards program and is dedicated to providing educational improvement opportunities for all schools and all children, the press release said.

Funded through a grant from the National Aeronautics and Space Administration (NASA), Blue Ribbon Schools of Excellence seeks to find what is working in schools and to share this knowledge with all schools through school improvement initiatives and a Web-based interactive library of best practices